Dr's Theodore Freeman and Anne-Marie Irani honored at ABMS Board of Directors Meeting.

ABAI leaders were honored at ABMS Board of Directors Meeting. 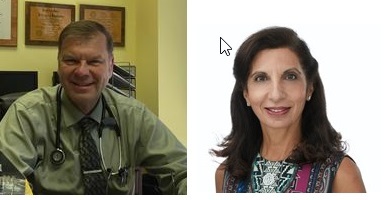 The American Board of Medical Specialties (ABMS) Board of Directors meeting held virtually 6/18/2020 began with an inspiring video tribute to outgoing BOD members. This year two ABAI diplomates and leaders were honored for their distinguished service.

Dr. Ted Freeman was recognized for his distinguished service on the ABMS BOD as the outgoing ABAI Member Board Empowered Representative (MBER). Dr. Irani provided a touching tribute highlighting Dr. Freeman's leadership and the important broad perspective of one of the few board members who has served in academic, private practice and active duty military capacities as a specialty physician and diplomate. Dr. Freeman is also completing his term on the ABAI Board this year. He has served admirably as the ABAI Liaison to the ABMS BOD from 2017 to 2020 and most recently as the ABAI's first MBER to the ABMS Board following implementation of its new governance in June 2018. Dr. Michael Nelson, ABAI President, was installed as his replacement during this same meeting.

Dr. Anne-Marie Irani was recognized for her nearly 10 years of service in a moving tribute by fellow board member Dr. Dan Cole from the American Board of Ophthalmology. He highlighted Dr. Irani's leadership, courage, decisiveness as well as profound analytic and interpersonal skills echoed by many on the ABMS Board. Dr. Irani served previously on the ABAI Board of Directors in addition to her service in multiple capacities at ABMS. Most recently, Dr. Irani served as the ABMS Secretary-Treasurer in an organization challenged with leadership transitions, new governance and now the unique elements of COVID-19. Dr. Irani is yet extends the tradition of a strong ABAI leader presence at ABMS helping shape the future of physician certification in all specialties.

On behalf of the ABAI Board, Diplomates and Staff, I wish to extend our deepest appreciation for their distinguished service, accomplishments and commitment to not only the specialty of Allergy and Immunology, but to the board certification community at large.