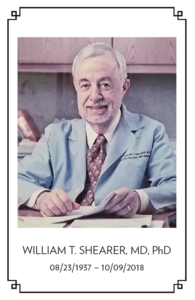 Former ABAI Director and Board Chair, William Thomas Shearer, M.D., Ph.D., 81, died peacefully on Tuesday, October 9, 2018 at his home in Houston Texas after a courageous battle with a long medical illness. He will be remembered for his generous spirit and love of medicine, his family and his devoted spouse Lynn Des Prez.

Dr. Shearer was born in Detroit, Michigan on August 23, 1937 to William Baird Shearer and Mary Louise Evon Shearer (both deceased). He earned his B.S. in 1960 in Chemistry at the University of Detroit and his Ph.D. in 1966 in Biochemistry from Wayne State University. He completed a post-doctoral fellowship in 1967 from Indiana University in Bloomington Indiana. He received his medical degree from Washington University in St. Louis in 1970 and over the ensuing 5 years completed pediatric residency training (mentor: Dr. Philip Dodge) and Allergy and Immunology training (mentor: Dr. Charles Parker) at St. Louis Children’s Hospital and Barnes Hospital. He received a faculty appointment at Washington University in St. Louis in the department of Pediatrics in 1974 and was quickly promoted to full professor by 1978 as Director of the Division of Allergy and Immunology.

He joined Baylor College of Medicine faculty and Texas Children’s Hospital in 1978 and remained Chief of the Allergy and Immunology Section he established for 34 years. He devoted his life to Baylor College of Medicine and Texas Children’s Hospital and was an extraordinarily productive member of his medical community for 40 years. Dr. Shearer was a national and international leader in his field of pediatric and adult Immunology.

His passion was to provide care to adults/children through teaching, research and direct patient care. In 1978, he courageously accepted responsibility for care of David Vetter, a 7 year old child living with Severe Combined Immune Deficiency (SCID) in a gnotobiotic environment (bubble). His innovative care of this young boy and other children led to revolutionary immunologic discoveries. He was a prolific writer and published over 400 scientific manuscript and served as a Chief Editor for Clinical Immunology: Principles and Practice (a premier immunology textbook) from 1996 until his passing. He began an active clinical research program in Houston Texas for children with HIV infection in 1984 offering the first clinical trials for children affected with this infection early in the national epidemic. Dr. Shearer was Principal Investigator for multiple nationally funded clinical research trials (Pediatric HIV/AIDS Cohort Study and the International Maternal Pediatric Adolescent AIDS Clinical Trials Network) throughout his professional career and these studies were conducted in Houston for 34 years (1984 – 2018).

Dr. Shearer was an excellent teacher and he was rewarded for his efforts with many accolades: Distinguished Teacher Award in 1984 from Baylor College of Medicine, Special Recognition Award from the American Academy of Allergy, Asthma and Immunology in 2004 and the Arnold J. Rudolph-Baylor Pediatric Award for Lifetime Excellence in Teaching in 2005. In 2015, together with his wife Lynn Des Prez, the American Academy of Allergy, Asthma and Immunology Foundation initiated the William T. Shearer and Lynn Des Prez Lectureship, an annual national academic lectureship that addresses cutting edge allergic or immunologic topics.

Dr. Shearer served as a Director of the American Board of Allergy and Immunology (ABAI) from 1990-1995; during his term he was ABAI Chair in 1994. He was a tireless supporter of his medical specialty and was an active and productive member of the American Academy of Allergy, Asthma and Immunology serving as Chair of the Clinical and Laboratory Committee from 2000-2005. He supported the Clinical Immunology Society and served as Councilor (1997-2001) and President from 2001-2002. Working with the Texas Allergy, Asthma and Immunology Society, he established and supported a primary care resident weekend conference that allowed exposure to the medical specialty of Allergy and Immunology. This effort has been ongoing for over 20 years and allows trainees with no experience in the field to meet with premier academicians practicing in Texas. He trained 120 young physicians during his tenure as Director of the Allergy and Immunology Fellowship Training Program at Texas Children’s Hospital/Baylor College of Medicine.

With all of these academic and research accomplishments, his real passion was improving the healthcare of children and adults with primary or acquired immune deficiency. He devoted countless hours to educating community physicians and providers in the early identification of affected individuals and promoting their referral of patients for specialty care and options to restore their health. He was an active supporter of national organizations (Immune Deficiency Foundation, Jeffrey Modell Foundation and others) that were devoted to accessing healthcare for individuals affected by immune deficiency. Dr. Shearer identified his patients as cherished individuals and despite his busy schedule rarely missed an opportunity to celebrate with them. He sponsored holiday celebrations for HIV infected children and their families, The David Dream Run. With Texas Children’s Hospital, Drs. Shearer and Feigin, created a lasting tribute to individuals with immune deficiency as the David Center (David Vetter Memorial Fund) supporting diagnosis, research and treatment access.

The family would like to thank Janice M. Hopkins, administrative genius, and Bibiana Perez, domestic engineer, for their special support and care. They also recognize the extraordinary care of Dr. Stanley J Pool and the wonderful hospice team that supported Dr. Shearer’s care at home so well.

A memorial reception was held on October 25, 2018 at Bradshaw-Carter Memorial and Funeral Services, 1734 West Alabama in Houston. Interment took place in the Chesterfield Cemetery in Bright, Ontario, Canada.

For those desiring, donations may be made in memory of Dr. Shearer, and will benefit the David Vetter Memorial Fund at Texas Children’s Hospital which is dedicated to research, diagnosis and treatment of immune deficiencies.